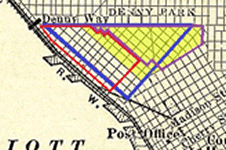 Motions and other supporting document help for child support forms and parenting plans.

$60 to have papers served anywhere in the Denny Triangle of Seattle.

The Denny Triangle is a neighborhood in Seattle, Washington, USA, that stretches north of the central business district to the grounds of Seattle Center. The southern tip of this triangle falls in the northern part of Pike Place Market.

The Denny Triangle borders Belltown as well and was once a century ago a large hill like Queen Anne, but was graded down, otherwise known as the Denny Regrade.