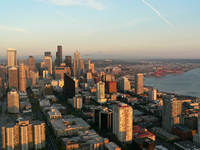 We will serve documents to anyone or to any place in the Seattle Retail District for $65. Other locations in Downtown Seattle can be served documents for as low as $60.

The Retail District of Seattle is also known as the Retail Core of Seattle, which resides dead center of Seattle Downtown District. It runs West from I-5 across from First Hill to Pike Place Market. Pioneer Square is only a few blocks south of the retail district. To the north is Cascade neighborhood. It includes Westlake Center, Pike Place Fish Market, Macys, and Pacific Place to name a few of the well known retail spots.