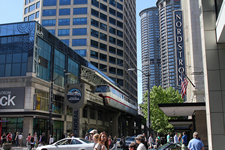 Any business or personal residence served documents for $60 in the Westlake Center in Seattle.

Westlake in Seattle is but a few blocks between the shoreline and Aurora Avenue N where Queen Anne begins. Westlake extends to the south and to the north near Fremont .